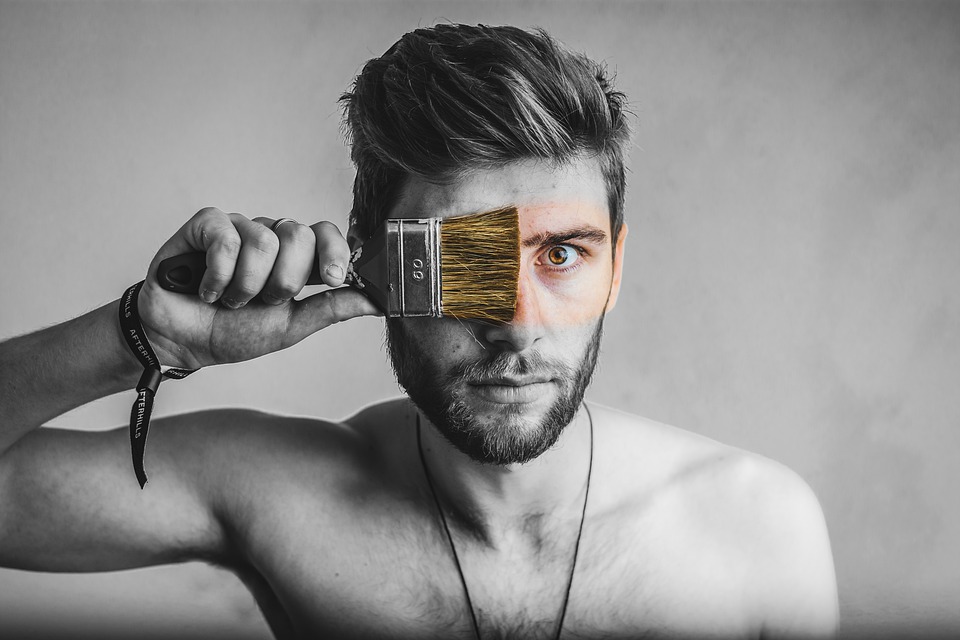 Gather round while we share an epic tale of semantics, heuristics and, the star of the show, The Storyteller in your Brain.

The Storyteller in Your Brain

Back in the 2000s a neuroscientist called Michael Gazzaniga, working at Roger Sperry's lab at Caltech, was studying the effects of having the corpus collosum severed.

The corpus collosum is a dense bundle of neurons that connect the two halves of our brains. If this is severed it means the two hemispheres can no longer communicate with each other, effectively isolating the functionality of each half. The condition is called split-brain.

Sharing his experiences in an article for Discover Magazine, Dr. Gazzaniga relates this interesting story.

We showed a split-brain patient two pictures: To his right visual field, a chicken claw, so the left hemisphere saw only the claw picture, and to the left visual field, a snow scene, so the right hemisphere saw only that. He was then asked to choose a picture from an array placed in full view in front of him, which both hemispheres could see. His left hand pointed to a shovel (which was the most appropriate answer for the snow scene) and his right hand pointed to a chicken (the most appropriate answer for the chicken claw).

We asked why he chose those items. His left-hemisphere speech center replied, "Oh, that’s simple. The chicken claw goes with the chicken," easily explaining what it knew. It had seen the chicken claw. Then, looking down at his left hand pointing to the shovel, without missing a beat, he said, "And you need a shovel to clean out the chicken shed." Immediately, the left brain, observing the left hand's response without the knowledge of why it had picked that item, put it into a context that would explain it. It knew nothing about the snow scene, but it had to explain the shovel in front of his left hand. Well, chickens do make a mess, and you have to clean it up. Ah, that's it! Makes sense.

What was interesting was that the left hemisphere did not say, "I don't know," which was the correct answer. It made up a post hoc answer that fit the situation. It confabulated, taking cues from what it knew and putting them together in an answer that made sense.

In short, we come with specialized mental machinery designed to confabulate. To take seemingly random facts or concepts and combine them into a coherent (more or less) story. That's interesting for a neuroscientist. It's pure gold when you're a plucky little ideation bot wanting to solve the problem of creativity on-demand.

The Heuristics in Your Brain

Nature is a messy place and not all problems we encounter are easy to solve using a step-by-step procedure. For example, you don't quickly calculate Newton's laws of motion when trying to catch a ball. You simply know how to do it.

Like catching a ball, creativity is heuristic. It's not possible to follow a predefined set of steps to arrive at a guaranteed creative outcome. Instead, we need to take a more heuristic approach by giving our brains the opportunity to compare many different, potentially creative possibilities.

To get this right we need the last piece of the puzzle.

The Semantic Map in Your Brain

Semantics is the study of the logic and meaning in linguistics concerned with how the cognitive structure of words, their relationships and their meanings are codified in your brain. What's interesting about this is that there are semantic distances between these words and concepts.

What is more closely related to a dog?

You likely chose A because a wolf is the most closely related to a dog biologically. They are both canines.

What is the next most closely related, pig or submarine? You likely chose B, pig. It's not a canine but it is an animal.

Trillions of these semantic relationships are sitting right there in your brain, just lying around.

Time to put 'em to work.

The building block of creativity is association.

What we view as a creative idea is often, at its heart, an unusual or counter-intuitive association between two concepts that are connected in some way (either closely or loosely).

If we want to generate more associations we need to feed the storyteller in our heads plenty of semantically related concepts and let it confabulate them into unique and unusual concepts.

Engaging your storyteller with semantically diverse concepts is exactly what ideate bot does for a living.

Flashing random concepts at your brain is not going to be effective at enhancing creativity. Concepts that are too semantically distant make it difficult for your storyteller to confabulate them together. By the same token, semantically identical concepts have nothing to associate, so that is pointless too.

The sweet spot is a large, but limited, semantic space loosely orbiting a tight-knit semantic core (i.e. the topics around which you want to ideate). This is accomplished using Seed Concepts. 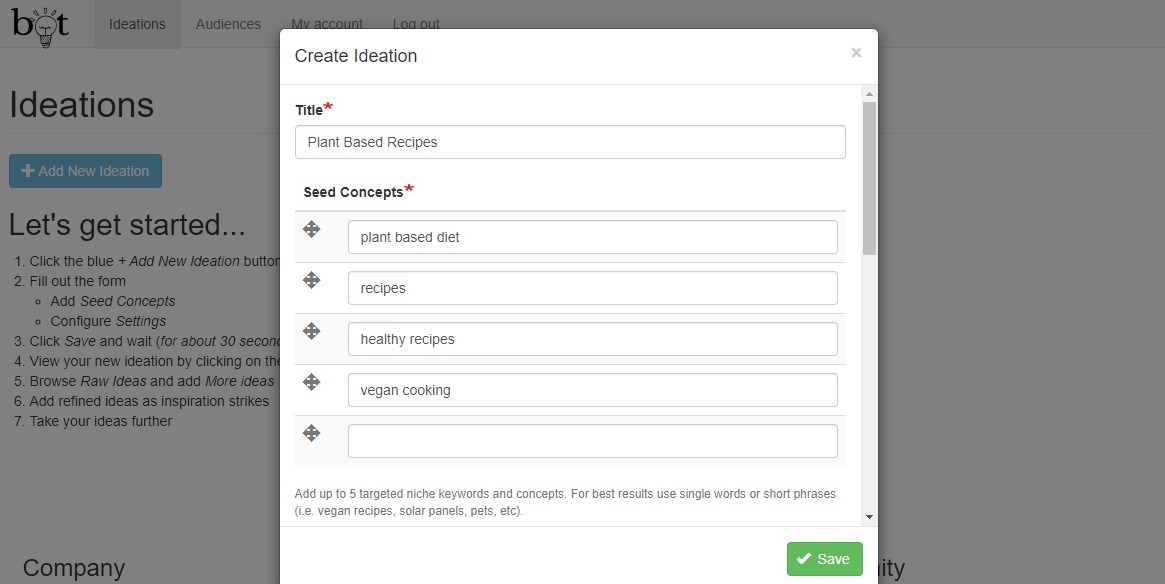 Behind the scenes, ideate bot gathers a diverse and unique array of semantically relevant (both close and distant) concepts and prepares itself to present your brain with a series of heuristic flashcards.

Our brains are great at knowing when they can disengage. Usually when we're doing something humdrum and run-of-the-mill, like driving. However, they spring into action when things are incoherent, or off in some way.

The Raw Ideas generated by ideate bot are designed to engage and target the storyteller by introducing a bit of chaos and incoherence to otherwise semantically close concepts.

To accomplish this it presents small batches of raw ideas, 3 - 5 at a time to avoid overload (our brains can quickly become frustrated if overworked).

Raw ideas are purposefully obtuse because they need to prevent your brain from understanding the semantic intent of each idea instantly.

If you understand a sentence perfectly well, there's nothing left to associate. Boredom sets in.

If I present your brain with these two concepts:

You likely associated them into 'How to make Gelato'. That's a valid new concept, but not particularly imaginative. I could add an additional concept to add a bit more semantic space. Like this:

That's a bit harder to associate, but that's where the juicy, juicy nuggets of creativity lie. It takes a bit of practice to get right, but once you have the hang of it, ideating using heuristics and semantics is both fast and effective... on a whole new level.

Like all heuristic processes, using ideate bot effectively takes a bit of practice. You need to get a feel for when concepts are simply nonsense (white noise) and when there are some really unique, fun and creative associations to make. The best way to learn is simply to start doing.

Feed your amazingly creative brain plenty of concepts to associate and get out of its way.

It's a lot more rewarding than sitting around trying to brute-force inspiration while staring at a blank screen.